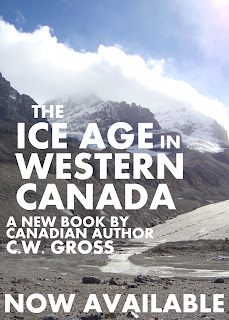 The "Ice Age" conjures images of woolly mammoths traversing the vast tundra, ferocious sabretooth cats with terrifying dagger teeth, fur-clad "cave men" eking out a savage existence, and limitless fields of ice covering a silent, frozen world. Yet the reality is even stranger… and more fascinating!

The Ice Age in Western Canada uncovers the last 2.6 million years of history in British Columbia, Alberta, and Saskatchewan. In a dynamic time like the ice age, Western Canada was a dynamic place. British Columbia was the centre of one of the two vast ice sheets that covered the northern half of North America. Saskatchewan was the Western front of the other. Alberta was the meeting place, and melting point, between them. Some of the most dramatic glacial geology and best fossil records of ice age animals in Canada are found here, and some of the oldest evidence of human beings on the continent. But the story of the ice age is not only a relic of the past: Western Canada is at the centre of international debate over the effects of human activity on the planet's fluctuating climate. From the oil and gas exploration to pipeline projects, changing sea levels to raging wildfires, the eyes of the world are on British Columbia, Alberta, and Saskatchewan.

Written by professional educator and Alberta native C.W. Gross, The Ice Age in Western Canada blends palaeontology, geology, archaeology, ecology, climatology, conservation, and Indigenous history into a compelling narrative about how the modern provinces of British Columbia, Alberta, and Saskatchewan were shaped by this fascinating period in the Earth’s recent past.